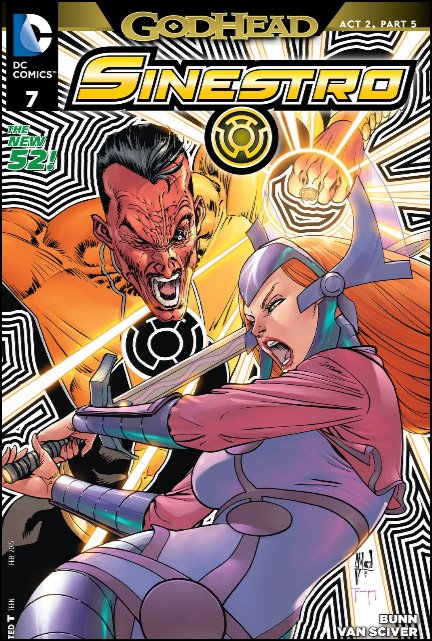 Sinestro #7 is recommended for any John Stewart fan. It really succeeds at furthering the dynamic between John Stewart and Sinestro, has great character development for the duo, and Sinestro’s daughter, Soranik Natu, and even though it is a seemingly low key part of the sprawling “Godhead” event, it pushes the plot forward quite a bit and proves an integral part of the saga.

John Stewart is heavily featured in this comic, and this is the first time readers see him since he obtained a Star Sapphire ring in Green Lantern Corps #36. Interestingly, John is a regular Green Lantern here, and there is no sign or mention of the violet ring. I’m sure this is entirely intentional. I believe most people were under the impression that he would remain a Star Sapphire for at least a little while, but I guess he simply took the ring off when he didn’t need it anymore. There is still the question of what he will do with the ring and how wearing it has changed him, if at all. I’m sure these issues will be addressed in coming Green Lantern Corps issues, as is appropriate.

In a bit of a surprise, legendary Green Lantern artist Ethan Van Sciver delivers the art for this issue. I imagine it has something to do with Dale Eaglesham departing to go draw Secret Six, and incoming artist, Brad Walker, not being quite situated yet. The art is splendid. Van Sciver brings his usual painstaking detail, distinct takes on characters, and interesting rendition of how the Lanterns use the emerald energy.

Sinestro has taken an interest in the New God Bekka ever since he first encountered her. This story begins after he persuaded Space Pirates to attack Bekka’s assault force. The pirates were dashed to pieces, as Sinestro expected they would be. The renegade Lantern sends a hologram construct of himself to converse with Bekka. After sharing some words, Sinestro brings out that Bekka must have some kind of interest in him because she continues the conversation when she could leave at any time. Sinestro admits that the reason he sent those Space Pirates against her was simply because he likes watching her work. This surprises the Goddess and gets her attention.

Sinestro’s true body is hidden away within the Anti-Matter Universe on the planet Qward, where the coalition of Lanterns has taken refuge from the New Gods. Sinestro walks while planning with John. Most of Sinestro’s attention, however, is on his simultaneous conversation with Bekka. He still manages to be his usual condescending self, but his disparaging words to John Stewart don’t faze the Green Lantern at all. Special note should be given to Ethan Van Sciver’s artwork in these scenes. The level of detail he puts into Sinestro’s face is very impressive. His John Stewart is also quite striking.

What John does get a bit perturbed about is Sinestro not paying attention to him, and he reminds the Korugarian of the dire situation they’re in. Sinestro quickly counters by pointing out that he was the one who saved the Green Lanterns and brought them to the Anti-Matter Universe, where they are safe for the time being.

As John and Sinestro walk and talk, we see plenty of great designs for the various alien Lanterns spotting the background and foreground. I always appreciate when the artists put real effort into coming up with great aliens and environments. As I’ve pointed out in previous reviews, the extra effort makes for a more immersive world.

John really has no interest in playing petty one-upmanship games with Sinestro, especially since he now has to lead the Corps in Hal Jordan’s absence. Sinestro has little faith in John as a leader, and points out that the only thing he ever does is take Hal Jordan’s scraps. Again, this doesn’t faze John, and he lets on about a plan he has to take the fight to the New Gods. He wants to use the Indigo Tribe’s teleportation ability to catch a God unaware and capture them.

Elsewhere on Qward, hostilities between the Sinestro Corps and their rivals, the Green Lantern Corps, heat up when Arisia and Jruk have words with two of Sinestro’s cronies. It comes to blows and the fight only grows from there, involving more and more Lanterns. Soranik and Iolande try to quell it before it snowballs into a full scale riot.

I’m really curious about where the creative teams are taking Soranik Natu. I mentioned in my review for Green Lantern Corps #36 that I was surprised Jensen chose to use her as a confidante for John Stewart. Jensen isn’t one to just do something without it having a purpose, so I’m confident we’ll see more moments between John and Soranik. We learn here that some of the Lanterns clearly don’t trust Soranik, including her own Sector Partner, Iolande, because she’s been associating with the Sinestro Corps recently. However, as seen in Green Lantern Corps #36, John Stewart still has trust in her.

Are the creators moving toward deepening the relationship between John and Soranik? I’m actually really open to that. I think that a relationship between them would be an excellent and very natural way of furthering John Stewart’s connection to Sinestro, the most prolific villain in the Green Lantern mythology. The similarities between Soranik and Katma Tui can’t be ignored. The creators seem to be making Soranik look even more like a modern take on Katma, by changing her hair style to something closer to Katma’s.

The creative teams seem to really be addressing the prospect of John being a leader. A moment that I really like is when John Stewart stops the fight between the Lanterns, not by using force, but merely by talking sense to them. He tells them that they can’t fight each other when all their lives depend on one another. Of particular note is that the Guardians are seen in the background, looking on in seeming pride and acknowledgment as John rallies the troops and gets them to unite.

This is in sharp contrast to how the Guardians see Hal Jordan lately, who has openly defied them in seeking the aid of the Black Lanterns. What I get from this scene is that the Guardians are seeing John Stewart’s potential, and perhaps realizing that they may have overlooked him, and maybe even that they chose wrong in making Hal Jordan the Corps Leader instead of John Stewart.

I really like how the art team depicts the Anti-Matter Universe. It looks completely alien and like a whole different kind of place compared to the regular Universe. An aspect that has frequently disappointed me in Green Lantern comics is the mundanely normal looking Anti-Matter universe. It usually looks more or less like the regular Universe, which makes for a big missed opportunity for building a more interesting world. That opportunity is taken here as the art team bestows a very perplexing multi-hued sky hanging over Qward, flecked with black marks. It really makes for a strong and foreign atmosphere.

Elsewhere, Sinestro continues his slightly flirtatious conversation with Bekka. She eventually tells Sinestro to get to the point of what he wants, and after telling her that he sees great potential in her, his construct dissipates, revealing a Yellow Lantern ring in its wake, which chooses Bekka as its new bearer.

I actually suspected that the Indigo Tribe might pull something. John makes a small allusion to it in the Green Lantern Corps: Futures End issue, and in Green Lantern Corps #36, Iroque offers to open up a dialogue with the New Gods, but her suggestion is quickly squashed. They may have seemed like small moments, but the hints were there, and I give the writers a lot of credit for how smart this crossover is, and how much control they have over it.

I’m intrigued with where Soranik is headed. There is a panel in Green Lantern #37 where John is standing at one end, staring down Sinestro at the other end, and Soranik is in the background, directly in the middle. This may have been an intentional sign that she’s somewhat torn between her loyalties with the Green Lantern Corps, and with Sinestro and her fellow Korugarians.

A lot of the pieces in this grand game were moved in captivating ways this issue. What is Sinestro hatching with Bekka? What will Soranik ultimately choose to do with her place of acceptance in the Sinestro Corps? Will Soranik and John Stewart draw closer together, and how close, if so? Will the Guardians grant John Stewart leadership of the Corps, and what will that mean for the defiant Hal Jordan?

“Godhead” is a very solid crossover with smart writing and compelling goings-on for most of its main characters. This issue only reinforces that. If you’re a John Stewart fan who regularly doesn’t read Sinestro, I highly recommend picking this issue up. I’m happy to see DC actually using John more and so effectively. They’re strengthening his ties to other major characters of the Green Lantern mythology, instead of divorcing him from everything and diminishing his roles in stories. We’re seeing a complete turn around from the Geoff Johns era, where John Stewart is concerned. John is a famous and loved character, and DC finally seems to be treating him with respect. This issue is no exception.