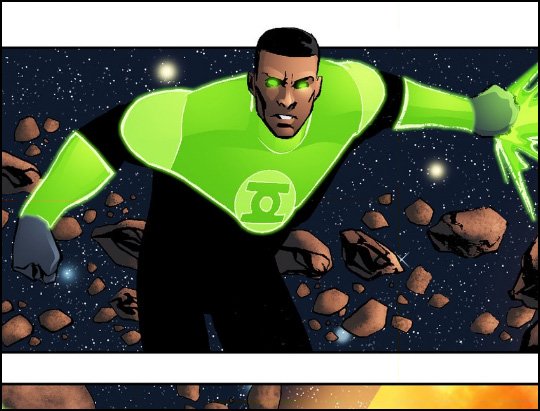 Bryan Q. Miller’s Smallville: Lantern continues to heat up as the middle movement comes to a close, setting the table for an undoubtedly powerful endgame. It is all the right parts familiar and surprising for fans of Green Lantern John Stewart. While Miller is very respectful of the Lantern-verse -understanding what’s great about it, what it needs, and what it doesn’t- he’s also very daring with it, taking full advantage of this alternate continuity and presenting the Green Lantern world in a way we’ve never seen, and guiding John Stewart down a bold new path.

The stakes have been raised. Parallax, the living embodiment of fear, has set his sights to Earth, and Superman and Green Lantern might not be enough to stop him. Fortunately, they get a little help from their friends. As the threat level has increased considerably, other DC Universe heroes get involved, most notably Batman, as can be seen from the Cat Staggs cover. These chapters take us to shadowy Gotham City, where Superman teams up with the World’s Greatest Detective to battle the new minions of Parallax.

The story begins with one of these additional heroes, who is, interestingly, Blue Beetle. While he’s in bed, his scarab starts freaking out because of an alien threat. The yellow power rings Parallax spewed last chapter have reached Earth and are looking for suitable fear inspiring wielders. Blue Beetle gets the Titans together in preparation for whatever the yellow falling stars may bring.

In Gotham, Batman and his partner, Nightwing, who in this reality is Barbara Gordon, spy the yellow downpour heading straight for Arkham Asylum. The Smallville Batman is kind of weird to me, primarily because his face is colored the same color as his cowl. It makes for a strange visual, which is certainly not better than the traditional look.

Far across space, Parallax still has Green Lantern and Superman in his tendrils, and the fear entity gloats about how his fear harvesting rings have reached their planet, and he will soon feast on the fear there. Suddenly, the Guardian Ganthet, who is also a prisoner of Parallax, speaks to Clark and John telepathically, explaining that the other Guardians have momentarily dazed Parallax’s mind. Ganthet quickly tells them to find that which Parallax fears, and before he can say more, the entity breaks free of the Guardians’ spell, and in a shocking display, he literally rips Ganthet in half. The distraction allows Green Lantern and Superman to escape. They retreat from Parallax’s asteroid cave and try to seal the whole thing, with Parallax still inside, in a giant emerald bubble. John urges Clark to head back to Earth to stop the yellow rings from generating more fear, which will only further strengthen Parallax. Superman is reluctant to leave John behind against such a powerful foe, but he knows it’s for the better, and with John’s urging, he heads back to his adoptive planet.

Part seven seems to end quickly, but is very exciting, nonetheless. Though Ganthet appears to have been killed, I’m not sure if ripping the Guardian in half is enough to keep him down. Despite Parallax still being presented as some bizarre monstrous entity, his design is leaps and bounds superior to what is seen in the mainline DC Comics continuity (and most definitely the 2011 Green Lantern film). Marcio Takara’s art continues to be simple, but very effective and Strachen’s coloring is bold and sharp.

John Stewart sits part eight out entirely. Instead of featuring his cosmic struggle, Miller catches readers up with Green Arrow, who suffered a severe beat down from Prometheus. He wakes up in the hospital with Chloe to greet him. She was told of Oliver’s misadventures by Lois Lane. Takara’s art and Strachen’s colors are great here. The expressions and mannerisms of the characters are expressed brilliantly, and Miller injects a genuine sense of care between the two. The creative team succeeds tremendously at depicting Chloe and Oliver in these quieter scenes.

The Department of Paranormal Activities agents who Oliver accompanied in the hunt for Prometheus are suffering, too. The leader, Agent Chase, is in critical condition, and another member died. Chloe is all for finding Prometheus and getting some pay back.

We get an update on what Lex is up to. Last time we saw him, he paid a visit to Mrs. Hunkle in hopes of getting information about Alan Scott, the Green Lantern of yesteryear. He’s taken an interest in this figure because Superman is now a Green Lantern, and Lex knows there must be some connection. Mrs. Hunkle doesn’t trust Lex, and is not going to tell him of Alan Scott’s whereabouts. Lex threatens to buy her neighborhood and replace it with whatever he wants. As their altercation continues, Alan’s nearby power battery lights up and Clark’s distress call to all Lanterns is heard through it. Superman explains the situations he’s coming from and going into, and is looking for help from any possible Lanterns. Surprisingly, Professor Hamilton answers the call. His colleagues discovered a way to piggyback their transmissions over the ring’s communication network.

It will be very interesting to see how Miller links Alan Scott with the contemporary Green Lantern mythos, seeing as, traditionally, even though he is the original Green Lantern, Alan is something else entirely and conceptually apart from the other Green Lanterns.

Back at Arkham, Batman and Nightwing are fighting ring empowered inmates and not faring well at all. Mr. Freeze makes it clear that they are not in control of their actions. As he’s going to obliterate Dr. Harleen Quinzel, she begins laughing hysterically, but is saved by Superman, who joins Batman and Nightwing in the fight against Batman’s ring wielding rogues.

Another thing I don’t like about this Batman is that his word balloons are sometimes dark and over stylized. It comes across as a little over the top and trying too hard to make him ominous.

Part nine begins with John Stewart battling Parallax in the asteroid field that rests by a star. Parallax taunts him with the death of Hal Jordan. The fear monger claims he can bring Hal Jordan back if John gives into his fear. John refuses and keeps fighting. Apparently, Parallax can bring all the dead Lanterns back to John. I’m not entirely sure if he’s being literal or not.

John decides to go toe to toe with Parallax with force blasts, but the entity can feel John’s fear. He knows that Superman planted seeds of doubt in John’s mind. John is afraid his mission as a Lantern is a lie and his purpose is false, meaning he’s given his life away to an empty cause. Now the reason behind those earlier scenes of John not having any answers for Clark makes sense.

Parallax gains the advantage, and tells John he will show him a new way to see things, and then we’re taken back to Earth to the Watchtower loft where Chloe, Oliver, and digital Tess are busy with the current yellow ring crisis. Tess is coordinating the Titans and Superman in their effort to contain the yellow epidemic. Over the comm network, Superman tells Oliver to concentrate on threats not related to the rings, since this would be prime time for other baddies to try and wreak havoc. Chloe links into Tess’ network and discovers that the D.E.O. mystics tracked Prometheus to a warehouse and that they sent drones to flyby and gather intelligence. It seems he has a load of empty trucks, which can only mean he’s got a major heist planned.

Oliver Queen suits up in mega armor as he prepares to take the fight to Prometheus again. At Arkham, Superman is locked in battle against ring powered Firefly, Bane, and Poison Ivy. They definitely don’t seem to be in their right minds… even for them. They appear possessed, and are obsessed with causing fear throughout the world for their master to consume. Batman tells Superman that the power ring isn’t doing him any good, and the Man of Steel manages to shatter his Green Lantern armor, proclaiming he’s more than just the ring.

Suddenly, the Yellow Lanterns bow down. Superman turns to see John Stewart has returned to Earth… but he’s accompanied by the Parallax entity, and he’s succumbed to his fears. Having been possessed by Parallax, John Stewart is now his host, and is completely decked in the awesome Parallax armor!

John Stewart has never been Parallax before. I’m not sure how I feel about that development for the character, but I can’t help but admit it’s exciting and intriguing for this story. It’s a very big moment for John Stewart, mainline canon or not. I assume John will do what Hal Jordan could not and overcome his fears and cast Parallax aside. I also have a feeling that Smallville: Lantern will end up being a story about the Green Lantern Corps returning to prominence, which includes the Guardians of the Universe resuming their station as administrators of the Corps, and protectors of life throughout the Universe.

Bryan Q. Miller keeps the intensity high and displays one of the most captivating takes on Green Lantern there has yet been. Marcio Takara’s artwork is a graceful, fluid delight, complimented by Carrie Strachen’s strong colors. Smallville: Lantern gets better and better, and I can’t wait to see what happens next.