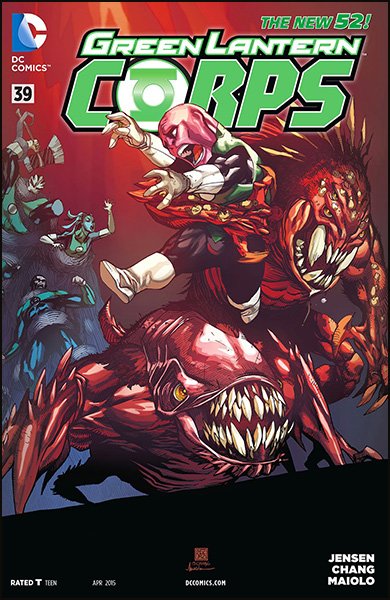 There is nothing wrong with this comic on any level. Everything is executed splendidly. When Van Jensen, Bernard Chang, and Marcelo Maiolo are together for the complete length of an issue, we’re guaranteed a marvelous ride. This creative team is so perfect for John Stewart that it makes me gloomy that there is only one issue left in their run. According to DC Comics Co-Publisher Dan Didio, Green Lantern Corps will turn into a new title called Green Lantern: Lost Army, with a new creative team. Those people are going to have some enormous shoes to fill. I like to keep an open mind, but it’s difficult for me to believe that Lost Army will be as good as what we’re seeing now in Corps. This current run has been my favorite of any Green Lantern comics.

Each member of the creative team shines bright. Bernard Chang continues putting out the best renditions of John Stewart to be seen anywhere, and I’m amazed at the loads of great alien designs he conjures up. Many special moments that give Green Lantern Corps that extra icing on the cake are Chang’s contributions. He’s a real entertainer with a strong grasp of emotion, how to convey it, and what reactions to convey at the right time. The look on John’s face right before the reveal on the final page of this issue is exactly what I’m talking about.

Marcelo Maiolo builds such strong atmospheres with his moody coloring. This issue features somber and horrific moments, and Maiolo sets the tone flawlessly.

Van Jensen is superb at taking these cosmic storylines, with all their wacky aliens and locales, and humanizing them. Most of the characters presented here look nothing like humans but it is easy to feel for them. When Jensen is able to tell an interesting story about a dismembered leg, making aliens sympathetic characters is likely a piece of cake for him, which makes him perfect for Green Lantern Corps.

The characters have grown a lot. The evolution of Jruk is particularly apparent here, as he takes on more traits of John Stewart. He’s more levelheaded, and not as ready to haphazardly rush into situations. We see Feska being a mother, a daughter, and a mourner as she loses someone very dear to her. John is still rocking the Star Sapphire ring, but we still don’t know what difference it is going to make. Jensen is holding out to the very last issue to reveal what he has planned for that, it seems.

This story, titled “Demons,” is a very interesting amalgamation of science fiction, horror, superhero, and mystery, and it’s all done spectacularly. The Lanterns continue to try to get to the bottom of whatever bizarre menace plagues planet Zarox, and it may be more than they bargained for.

This begins where the last one left off. John’s team of Lanterns is in Feska’s home, regrouping after being attacked by a zombie-like mob of Zaroxian citizens, and are trying to piece together what the heck is going on. Feska’s son Zep keeps talking about monsters, but Feska brushes his apparently superstitious talk aside; however, something sinister lurks outside the window. Chang and Maiolo build suspense by contrasting the rather peaceful inside with the silhouetted demons crawling around outside.

The monstrous creatures suddenly burst through the wall and begin overwhelming the Lanterns due to the sheer number of the beasts. Feska tries to protect her family, but her mother is mortally wounded when the creatures appear from behind the Lanterns, breaking through the front door. Surrounded, Feska lets off a huge blast that saves the Lanterns, but the demonic creatures get away with Maro as a captive. John hurries after them, but he loses the creatures quickly. This whole scene reads like a frantic moment in a horror film. The impact of Feska’s mother’s death is immediately felt. It is shocking and unexpected, and Feska’s reaction is totally palpable.

The story takes us to Von Daggle. His search for his long lost partner has led him to Ungara’s moon. Disguised as a demon, he enters a structure and finds a slave labor camp, where his partner is working as an overseer. This is one of the moments Chang has fun with alien designs. Daggle morphs into a wicked looking gargantuan beast to frighten off a would-be assailant.

On Zarox, the Lanterns reunite at a holy place where they take the body of Feska’s mother. Feska and Zep take a moment to mourn her passing. Once again, the entire creative team nails this moment. Jensen’s script is touching. Chang makes more striking use of silhouetting. Maiolo submerges the scene in somber purple hues and a misty looking sky. This issue is a progression of powerful scenes after powerful scenes.

Feska apologizes to Zep for not believing him about the monsters. He tells the Lanterns that he and his friends have seen the monsters sneaking away underground. The Lanterns head back into the city in search of an entrance to the subterranean structures with Zep in tow, since there is no safe place to leave him. They are quickly attacked by the zombie-like mob that swarmed them last issue. The crime boss Ocula is still at their head directing the attack on the Lanterns. John decides to forge his own path underground with an awesome looking double jackhammer construct. The Lanterns head down to get to the bottom of whatever is happening on Zarox.

More pieces of the puzzle come together when the story goes back to Ungara’s moon, where we get our first good look at this woman Daggle has been looking for; a covert Lantern named Asile. Chang delivers yet another great design. Her outfit seems inspired by Boba Fett from Star Wars: The Empire Strikes Back, but Chang has plenty of his own unique touches. Asile quickly drags Daggle aside and begins to explain what is going on there. The Guardians assigned her to keep tabs on an ancient threat, older than even the Corps. She tells Daggle of the Empire of Tears and how the Guardians defeated them and confined them to the planet Ysmault eons ago.

A family crash landed there with only the daughter surviving. She spent merely a few hours on Ysmault before she was rescued by the Green Lantern Abin Sur, but she was infected by something sinister during her time there. Abin took her back to Ungara, but the black disease within her festered and by the time Asile found her, the girl had set up her operation on Ungara’s moon. From there, she began the Shadow Empire; Asile has been spying on them. Daggle tells her that the Guardians are dead and her time there is over. He gives her the old power ring she used to wear, but before they leave, Asile shows Daggle what the slaves are building. He’s gravely disturbed to see it and says that they must warn the Corps.

John’s team continues deeper underground. There is a massive cavern underneath the city that may or may not be natural. There are mysterious runes on the walls that look like they’ve been there for decades. John tries to get his ring to translate them, but despite it recognizing the language, the ring is forbidden to translate the message by decree of the Guardians of the Universe. The mystery gets deeper and deeper, just like the underground path.

Eventually, the party is attacked by more demon creatures, and there is a funny moment when Jruk goes berserk and kills one with his axe. He apologizes to John, but John is also up for killing these bizarre creatures, and forms a wicked gatling gun construct. Bernard Chang owns this issue with his phenomenal shots of John and his constructs.

The party makes it to a large chamber guarded by a door, which John blows open with a power ringed bazooka, and within they find Ocula. The real surprise is there is a massive bomb there as well, of the same type that destroyed the planet Xanshi. John is going to have to confront this terrible weapon again. These bombs are no doubt what those slaves on Ungara’s moon are building.

This issue is excellent all around. Some may think Jensen is beating a dead horse by bringing up the Xanshi incident again, but I really don’t fault him for this. It was Geoff Johns who sent John back to moping about Xanshi after that had been resolved in Mosaic. I believe Jensen is putting the final nail in the coffin to the whole thing, which will prevent future writers from bringing it up again.

The enemies are very captivating. The Empire of Tears is one of the more interesting pieces of Green Lantern lore, and I think Ocula is great. I don’t want her to become a one-off villain. I think she should be added to John Stewart’s rogues gallery like Verrat Din. She’s too great a design and too fun a character. It’s still not known what connection the Empire has with the criminal Shadow Market spreading around. They’re clearly the same entity, but I’m not sure what the Shadow Empire gains by spreading criminal activity. Perhaps they’re controlling the people through a drug they’re circulating. I also don’t know why they would want to blow up planets, especially after they get the populace under their control. I suppose all will be answered next issue.

I can’t see Jensen wrapping up this entire Shadow Empire arc in one issue, though, even if it will be an extra-large one. This makes me think that the Shadow Empire may carry over into the new Lost Army series. It seems things are still headed toward the future that we saw in the Green Lantern Corps “Futures End” story, with John resorting to killing and Maro being abducted. The mute Green Lantern may become a commander for the Shadow Empire.

This issue earns a full five stars because I really can’t think of anything wrong with it at all. It’s not just that it’s competent, everything is exceptional. It is a very dense read that captivated me the whole way through and made me want to know more about what was going on. The villains are intriguing, the character designs are excellent and unique, all the characters are used to great effect, the art is astonishing, the coloring is extraordinary, and the script is solid and affecting. Lost Army is going to have to be unbelievably good to trump this title. Let’s hope for the best.