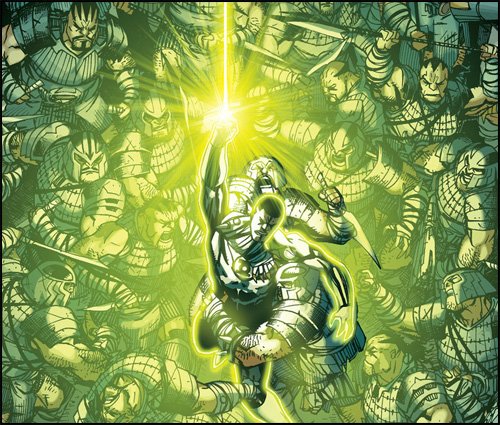 Green Lantern Corps #27’s story, titled “Forensics,” begins with John Stewart and a squad of Green Lanterns investigating a destroyed Green Lantern Sector House at the borders of the Khund Empire. Fans of previous Green Lantern Corps runs will likely be happy to see characters Isamot Kol, Vath Sarn, and Princess Iolande return to action. Rounding out the team is a snake-like Green Lantern named Oliversity and John’s main squeeze, Star Sapphire Yrra Cynril… who, I guess, tags along wherever John goes, more or less.
Ever since this current run began, Van Jensen has showcased his mastery at handling big casts with A, B, and C stories running concurrently. He continues that tradition here, aided by his usual partners in crime, Bernard Chang on art and Marcelo Maiolo coloring, who, as always, bring forth visual delights.

Jensen shows off his background as a crime reporter as he opens with a police procedural scene that is incredibly well written and thought out. This is something we don’t really see in Green Lantern comic books, and it rings so genuine here because it’s clearly coming from experience and being inundated in the field of forensics. Jensen displayed a bit of this in issue #26 when Jruk’s ring analyzed a corpse and was able to tell from the scarring that the individual wasn’t killed by a power ring blast. In this issue, Jensen takes things even further while never missing opportunities to further develop characters or their relations, thus retaining the very personal and human aspects apparent in all his stories.

John Stewart has the command, but Vath Sarn is giving him frequent trouble and adding great tension to the mix. Vath firmly believes that the criminals released from the Science Cells during the evacuation of Oa –back in Green Lantern Corps #24– are behind the attack of the Sector House in Space Sector 0422. However, John Stewart looks to gather evidence before casting blame. Vath views the criminals as already being guilty, and he believes they should have been left to die on Oa. Yrra thinks that’s a rather heartless viewpoint, but Vath holds that anyone with Lantern blood on their hands deserves to die, and he’s clearly alluding to Yrra, who was once Fatality, the Green Lantern slayer.

Unsurprisingly, John Stewart takes that personally and says that if Vath threatens Yrra again, there is going to be trouble. The Lanterns continue with their mission. Since the electronics to the surveillance cameras are shot, the group has to use their deductive skills to figure out what happened. As they examine the environment and put the pieces together, Bernard Chang and Marcelo Maiolo employ a great technique that shows bits of the past in side panels whenever the Lanterns discover more truth from their sleuthing. Maiolo puts an orange tint over those panels, and it’s somewhat reminiscent of the techniques the art duo used in Green Lantern Corps #24.

What the Lanterns deduce is that Kho and Procannon –the two Lanterns who were attacked– are still alive, because their rings never went out for replacements. At the scene of the crime, they also find a piece of material that drains ring energy when in close proximity to a power ring. It functions just like Relic’s robotic drones seen in Green Lantern Corps #24. With the plot thickening, the Lanterns decide to get in touch with central command.

The story zooms to the escaped convicts, who are soaring through space on the vessels they got from Oa’s impound lot. These scenes are cool, because we see some classic Green Lantern villains, but at the same time, the art takes a major dive.

The only way in which this issue suffers is due to the four art pages supplied by Sean Chen. I feel the same way about his art as I did when I reviewed Green Lantern Annual #2. It’s not great, and it’s not terrible. It’s just… there. It doesn’t have near the amount of style or character as Bernard Chang’s, and it’s very incongruous next to Chang’s.

Among the escapees is long time Green Lantern villain Evil Star. He’s given a complete redesign and it is terrible. It is immensely boring. If Sean Chen is responsible for this, that’s another knock against him. DC, if you’re listening, just have Evil Star use an updated version of his old suit (complete with a star on his head and a cape). A pale bald guy in a coat is a lot worse than the cheesy (but charming) design he had before, which still has salvageable potential for a cool modern spin.

The criminals are fighting over what to do next, while Durlans reveal themselves as being among them, and then we’re taken to Mogo to catch up with the Green Lantern recruits, who are currently under the oversight of Arisia. They’re all working on building a new training center when they suddenly pick up the transmission that the Durlan disguised as Hal Jordan sends in Green Lantern #27. We also get to see other inhabitants of the universe react to the news, including Feska’s family. Van Jensen shows that Feska’s son is left in the care of his grandmother, which is comforting to know. The people of Oranx are further assured that allying with the Khund was the right decision, and the Rhoonians tear apart Hal Jordan’s reasoning and lose even more faith in the Corps.

It’s amazing how much Van Jensen comfortably fits in these issues. He has a massive playground and legions of toys, and boy, does he ever make use of them. It’s a far-reaching universe with a vast amount of fascinating Green Lanterns and other various beings, and Jensen manages to exhibit his characters and places in a full, satisfying manner. Nothing seems rushed or like it’s not getting the time it deserves. A surprising thing about this is that among all this intergalactic warfare and drama, Van Jensen manages to have very strong character moments. He keeps John Stewart the main focus, and his relationship with Yrra Cynril gets more and more interesting set against this grand canvas of galactic combat.

As the story gets back to John Stewart and his gang, Bernard Chang takes over the art again. Marcelo Maiolo is present throughout the entire issue and it’s really apparent just how great Chang and Maiolo suit each other when there is another artist on the other page to compare to.

Marcelo Maiolo continues his awe inspiring coloring and tone setting, this time with powdery stars on a soft blue field of space.
John Stewart’s ring picks up the Durlan-Hal transmission, and he is left wondering if Hal has lost his mind. The squad decides to return to Mogo to see what is going on, but they’re in for another surprise when they pick up several distress signals from Sector Houses across the universe.

John Stewart decides to answer the call to the closest House under attack. On the way to the battle, Yrra asks John about his feelings toward draining the emotional reservoir. John brings out that the power is there for a reason, and when used responsibly, it can save lives, which is quite a reasonable stance.
The squad arrives to discover the Khund are behind the attack. John commands Isamot, Vath, and Iolande to take on the Khund vessels while he and the rest go to the Sector House to rescue Vode-M, the Green Lantern of Sector 0424.

While saving Vode-M, John admonishes Oliversity not to kill any of the Khund when he sees the snake Green Lantern has a Khund in a strangle hold. Oliversity bites the Khund, but it turns out the slithery GL has complete control of his venom, and he can use it to do many different things to his victims. In this case, he causes the Khund to have a very unpleasant slumber.

Vode-M recharges at a Lantern battery and John and crew fall in to support the other Lanterns battling the Khund. John’s team invades the Khund capital ship, where they find Lanterns Kho and Procannon imprisoned aboard. The Khund attack with weapons that drain the energy from power rings. Having fallen prey to such tactics before, Vode-M is ready for them and defeats the Khund who attack.

During the battle, Oliversity bites a Khund on the head and injects him with venom that works like a truth serum. The Lanterns then grill the Khund for information, such as why the Khund left the Lanterns they captured alive, since –as we saw in Green Lantern Corps #23– they don’t usually do that sort of thing. It turns out the Khund needed the Lanterns’ power rings. Killing the Lanterns would cause their rings to fly off in search for new owners. The Khund reveals that his people have been working with the Durlans, and that the shape-shifters have supplied them with some of Relic’s technology, which the Durlans collected from the Battle of Oa. The Khund have been reverse engineering it to develop weapons to counter the Green Lantern Corps’ rings.

Suddenly, Yrra stabs the Khund through the back, killing him. John Stewart is taken aback and asks why she did it. She reveals a knife that the Khund had been concealing that he was about to strike John with.

Regardless, John says he’s not going to allow killing, but Yrra objects, proclaiming that those are his rules, but she will follow her own rules and do what she needs to for the sake of their love.
With all of their number with them, John decides they need to head back to Mogo and alert the Lanterns of the Durlan and Khund threat. As they break out of the starship, they’re met with a massive Khund armada…

Meanwhile, the Durlans tell the escaped villains of their plans of destroying the Corps, and let the convicts know that they will help the Durlans, whether they like it or not.

There is tons to enjoy in this cosmic outing. It is literally everything I’d like to see from a Green Lantern book. It has a huge cosmic scope, seen through the eyes of a regular modern day Earthman, who is dealing with loads of aliens, as he battles against fleets while attempting to keep peace throughout the cosmos, shown with grand artwork and brilliant colors!

I know many have yearned for more Earthbound Green Lantern stories, but I honestly haven’t. It’s not space I got tired of. I was worn out from Geoff Johns and his direction for the GL line, with all that Emotional Spectrum jazz, color wars, Corps politics and infighting, and the general tone of it all.

One of the things I find most refreshing about Green Lantern Corps is the vision the creative team has for it. It is fun, exciting, bold, and charmingly witty. The book isn’t going to have readers rolling on the floor clutching their stomachs, but Van Jensen does impart it with a distinct sort of humor that’s bound to elicit regular chuckles and keep the title from being too dour. That’s really interesting because the Green Lantern Corps is being tested to its limit, yet due to the presentation of Van Jensen’s adventurous, good humored, and character driven writing, Bernard Chang’s detailed action cartoon styling with a slight anime touch, and Marcelo Maiolo’s vivid and dynamic colors, Green Lantern Corps manages to be an incredibly fun and invigorating title.

Green Lantern fans are sure to love this for the classic villains, sheer amount of GL’s who all have strong showings, and the police procedural scenes, which show an element of the Lantern Corps’ policing that we seldom see.