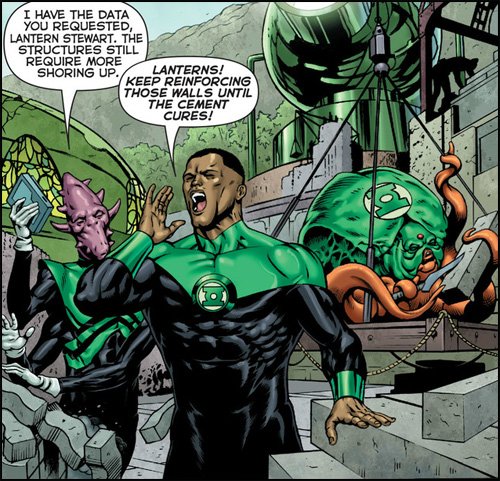 Robert Venditti heats things up in the Green Lantern universe as he sets a new direction for stories, which will no doubt test the Green Lantern Corps in new and enthralling ways. There have been mysterious threats looming in the background for a while in Green Lantern and Green Lantern Corps. For some reason, the shape-shifting Durlans want to destroy the GLC. They have been setting a series of events in play to damage the Corps, and this issue shows the first major act of their nefarious scheme come to fruition.

Since the Corps has been occupied with so many things lately, including dealing with Relic during the “Lights Out” event, and Hal Jordan’s decree to police the usage of the universe sustaining Emotional Spectrum, the threat of the shape shifting menaces has been a bit under the radar. Now, the Corps is forced to deal with the machinations of the Durlans as the shape-shifters reveal themselves as having infiltrated the Corps, and actively working to destroy the Lanterns’ reputation across the universe even more than it already is.

Of definite note is that regular artist Billy Tan isn’t present for this issue (aside from the cover). Dale Eaglesham takes up art duties with Jason Wright providing coloring, standing in for Alex Sinclair.

The Green Lantern Corps is getting situated on their new base planet, Mogo. In Green Lantern Corps #26, we saw John Stewart design a new city for the Green Lanterns, which was largely constructed by Mogo. There is still a lot of work to be done, and in the beginning of this issue, John is directing some of the Lanterns in the ongoing construction. Meanwhile, Hal Jordan checks up on Soranik Natu, the Corps’ head doctor, to see how she and her patients are doing. She’s a little low on necessities like beds and pillows, but she’s keeping things together. The same can’t quite be said for Saint Walker, one of her patients who suffered terrible wounds when Relic wiped out the Blue Lantern Corps on Elpis.

It’s not Walker’s medical health that’s a problem. According to Soranik, he’s made a full recovery, due in part to the healing attributes of his blue ring. Rather, Walker’s hopes are shattered from losing his Corps. Furthermore, hearing news that his friend, the White Lantern Kyle Rayner, has also perished doesn’t help.

Hal Jordan tells Walker he needs his help to police the Emotional Spectrum, but Walker tearfully declines. He says that the blue light of hope is the most powerful in the Spectrum, and as such, he will not contribute to the death of the universe any further.

Soranik implores Hal to give Walker time to gather himself, as he’s gone through a traumatic event. Hal agrees and heads back to the command center in the Citadel, where he carefully looks over a map with this protocol officer Kilowog and wonders where Sinestro and his Corps might be. In accordance with his new decree, Hal is planning on finding them and taking them out.

Kilowog suggests that the Corps focus on the criminals that they had to release when Oa blew up instead of the ring wielders, just as he did in Green Lantern #25. Hal brushes the idea aside, just as he did in Green Lantern #25. Again, we’re seeing Hal Jordan completely ignore the council of those around him. Warden Voz alerts Hal that the Braidmen of planet Dekann who surrendered last issue arrived on their transport.

It turns out the Braidmen have a plan, and surrendering to the Green Lantern Corps is a part of it. As the doors of the transport open and the Green Lanterns prepare to lead the prisoners to their cells, the whole gang of Braidmen rush out and cause confusion as they scatter in different directions. The Lantern guards eventually corral them, but three Braidmen get away, unbeknownst to the Lanterns. Among their number is the head Braidman Granack. They escape into Mogo’s jungle where they meet up with a contact of theirs; a Durlan disguised as a support staff chef.

The Durlan supplies the Braidmen with weapons from the Green Lanterns’ evidence vault, which have all proven to be deadly Lantern killers. The Durlan uses its knowledge of the Citadel’s structure to get the task force inside and direct them to the command center. To their surprise, they encounter Soranik Natu, her medical team, and wounded Lanterns being tended to. The task force immediately opens fire, blasting Green Lanterns. Soranik Natu yells out for everyone to stop fighting. She explains to her enemies that they’re firing on wounded and medical teams, and that she has no intention of fighting them.

One of the Lanterns, Gorin-Sunn, questions Soranik’s decision, opting to battle the enemy. Soranik, however, is more concerned with the well being of the wounded, and as commanding officer, she lets the enemy task force pass without a fight. Gorin-Sunn notes to the Durlan who is still disguised as a chef that he will not forget the chef’s face.

The Durlan leads the others to the command center where Hal Jordan suddenly receives a message from Soranik about the escapees. The Braidmen ambush Jordan from behind, laying him out with the butt end of a gun, and then stomp his face into the ground. While Jordan is incapacitated, the Durlan touches him and assumes his form. Disguised as Hal Jordan, leader of the Green Lantern Corps, the Durlan goes to a console and sends an open broadcast to the rest of the universe.

He identifies himself as Hal Jordan and begins telling of his plan. He reveals that there is a reservoir of finite energy in the universe, and that the Green Lanterns drain it every time they use their rings. Despite that, the Durlan says they will not stop using the most powerful weapons in the universe. They will, however, hunt down anyone who uses the Emotional Spectrum who is not a Green Lantern in order to lessen the cost spent on the universe. The Durlan warns that those who get in the Green Lantern Corps’ way will be met with deadly force. Suddenly, the video image of the transmission cuts to a recording of the battle the Corps had with the people of Dekann, in which Jordan commanded Mogo to cause a severe earthquake on the planet.

The inhabitants of the universe watching the broadcast are baffled and appalled at what they’re hearing and seeing. Eaglesham does a great job portraying the disguised Durlan as a sinister Hal Jordan, with powerful facial expressions and mannerisms. When the Durlan is done delivering the message, it cuts the signal and hands explosives to the Braidmen, who prepare to activate them while the Durlan escapes.

Hal Jordan begins to stir and sees communications coming in rapidly. Green Lantern Sector Houses across the universe have suddenly fallen under attack and the Lanterns are being wiped out. He tries to stop the criminals, but the the Braidmen willingly give their lives for their cause as they blow up the command center of the Citadel. Hal Jordan manages to survive the blast, due to the protective aura from his ring.

He’s found outside by Kilowog, who inquires as to what happened. Everything finally becomes clear to Jordan. He realizes that he fell into a trap set up by the Braidmen, and now war has been declared on the Green Lantern Corps across the universe.

Dale Eaglesham’s art is a definite step up from Billy Tan, and I like the coloring of Jason Wright more than that of Alex Sinclair. All around, this book has a better visual image than the other Green Lantern issues of Venditti’s run. The panel layouts are really cool, because Eaglesham uses rather stony looking bordering on some of the early pages, which looks both ancient and very advanced. It adds to the atmosphere of being on the Green Lanterns’ new base planet, Mogo.

The space scenes look excellent. In the very first panel, we’re treated to a beautiful swirl of colors as we see Mogo resting against a grand, starry, nebulous backdrop. The visions of the Khund battle ships attacking a Sector House are my personal favorites. The fuchsia coloring, mixed with the oranges of the explosions and red laser blasts makes for a stunning sight.

The characters are rendered strongly, too. Hal Jordan looks better than he does under Tan’s pencil, and Kilowog gets some impressively detailed shots. The fish Green Lantern MukMuk is a really fun design, and I hope he appears more in later issues.
The script doesn’t allow for Eaglesham and Wright to show off many functions of the power ring, but what is seen could have been more impressive. Wright could have employed more inspired coloring techniques. After being treated to Marcelo Maiolo’s sparkling work over in Green Lantern Corps, the ring energy seems rather dull here. All in all, though I like Tan’s work on the Star Sapphire villain Nol-Anj, I think the book would be better served if Eaglesham and Wright took up regular art duties.

Venditti continues to showcase a very flawed Hal Jordan. Though the Durlans are a very deceitful race, their plan was more or less just exposing the truth about Hal Jordan’s plan, which goes to show how messed up and hypocritical his policy is. Aside from the whole impersonation thing, the Durlans didn’t have to lie to get the universe to turn against the Green Lantern Corps. Hal Jordan really dug his own grave.

We still can’t quite tell where Venditti is headed, but there’s a definite deconstruction of Hal Jordan going on. While several Hal Jordan fans are taking offense to this, I find it makes for rather interesting stories. In fact, one of the main reasons I’m following this title is to see where they’re taking the Hal Jordan character, and what the purpose of all of this is.

I also appreciate seeing some very clever enemies of the Green Lantern Corps. The Durlans and the Clann aren’t about brute force, amazing light or reality bending powers, or destroying the universe, and I can’t stress enough how refreshing that is. They wage war in a different kind of way, and it is quite entertaining to see them outwitting the Green Lantern Corps with their crafty stratagem.

Venditti seems to tell a story rather slowly. There are high points and payoffs, but they don’t happen every issue. To fully appreciate Robert Venditti’s Green Lantern, readers have to be patient. This isn’t necessarily good, because I feel buyers should get their money’s worth every month. But, now it’s become apparent to me with this title that, while one issue might be totally boring, something interesting may happen next month. The run continues to be a roller coaster of ups and downs, with the highs never reaching too far into the sky, and the lows never plummeting into absolutely dismal territory.

Some die hard Hal Jordan fans may not like this series, because it consistently shows Hal Jordan negatively. Personally, I feel this is part of DC’s agenda, and isn’t just a contrivance of Robert Venditti’s. For those fans who do love the character, there is the possibility Hal Jordan will come out on top and grow as a character from all of this.
There are also other possibilities…

We’ll have to wait and see what Venditti has in store.