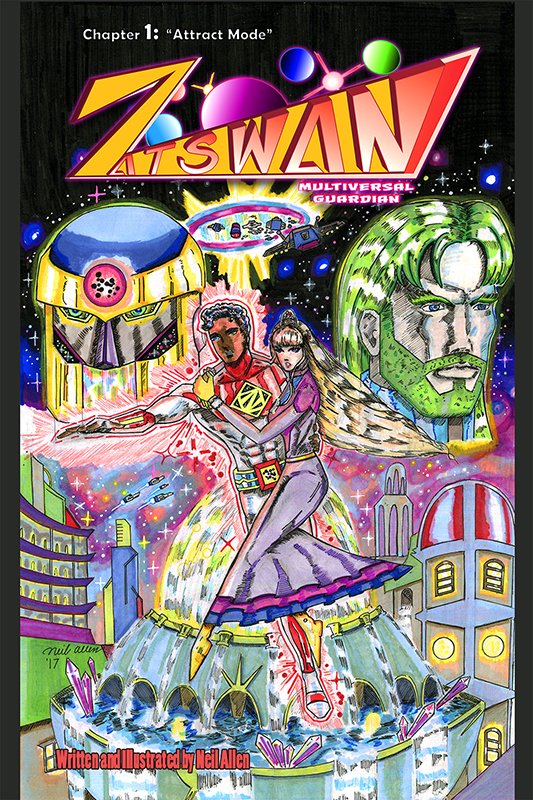 The logo and first cover for the comic book series Zatswan: Multiversal Guardian are revealed, along with the first five pages.

Zatswan: Multiversal Guardian is a science fantasy adventure featuring fantastic settings, larger than life threats, affecting characters, and cosmic romance. While living an ordinary life in Southern California, A.C. Cooper’s world is turned upside down when he is offered a tesseract; a strange object from the fourth dimension that grants amazing powers. A.C. and a young woman he just met, Marlene Ja lee, are inducted into an organization of cosmic peace keepers called the Zatswan. Utilizing the power of tesseracts, these guardians defend all known realities from the greatest dangers imaginable. A.C.’s loyalty and morality are challenged when his new duty as a Zatswan pits him against a mysterious young lady who is literally the girl of his dreams, with all existence hanging in the balance. 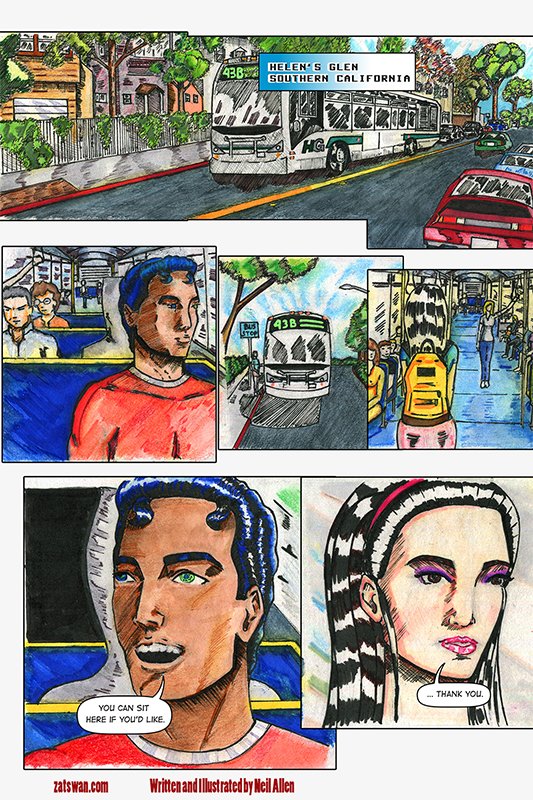 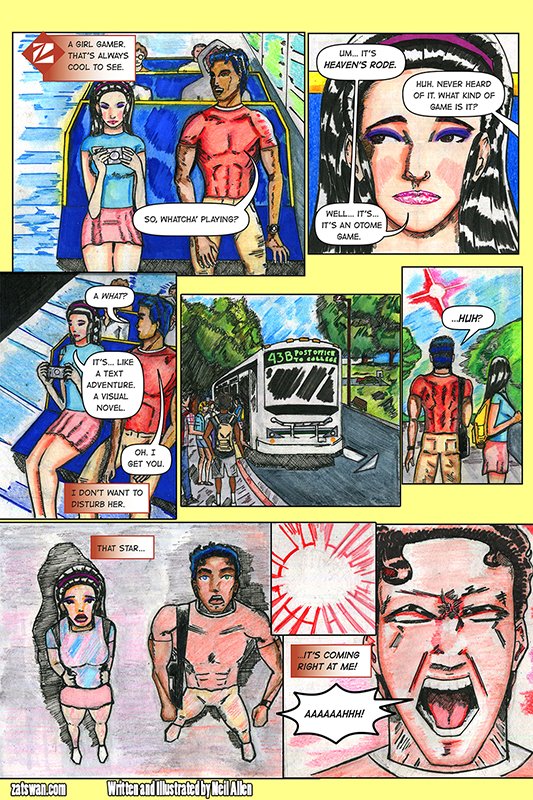 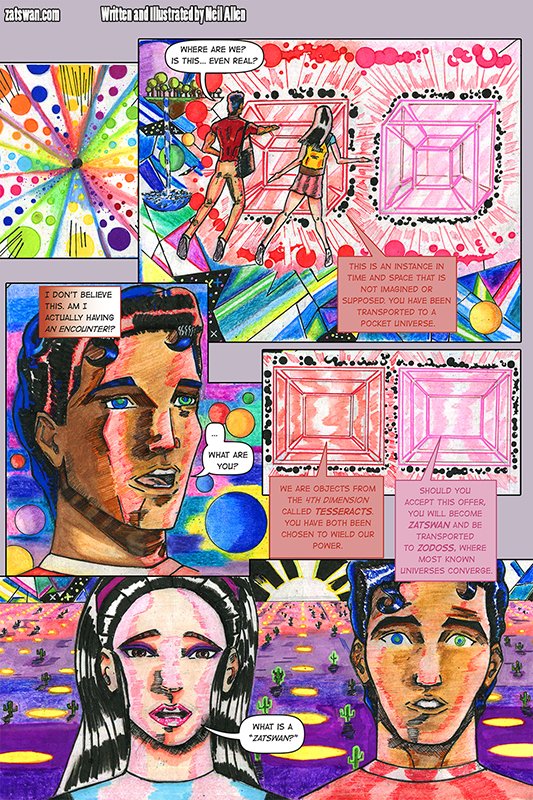 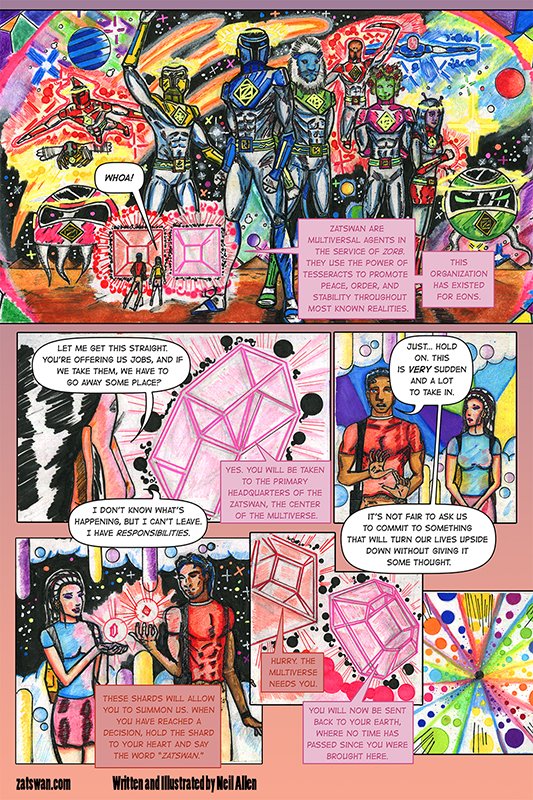 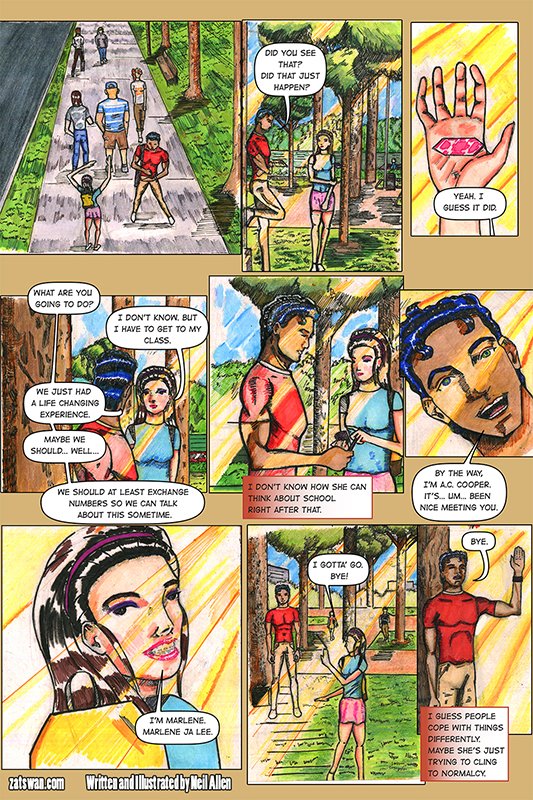 For some unknown reason, the fourth dimensional tesseracts are existing in the third dimension. Almost nothing is known about the fourth dimension, but there are signs of intelligence from there, like the tesseracts. 4th dimensional beings do not interact with 3D ones in any way the 3D beings can perceive. Traveling to a higher dimension is a much bigger feat than going to a different universe. The Zatswan are able to go from universe to universe by having their tesseracts envelop them and conceal them within contained 3D space. While inside the tesseracts, they momentarily cross into the 4th dimension, and from there, they are able to access different universes. However, while crossing over into the 4th dimension, they can’t perceive much.

While the tesseracts allow their users incredible powers, the Zatswan and their master, the powerful cosmic being known as Zorb, are not sure if they are using the objects for their intended purpose or not. These mysterious items are sources of unlimited energy, and a weakness of the Zatswan is that they can draw on too much power and burn themselves out.

The Zatswan come in different colors, with some excelling at abilities others don’t, but being weaker in other areas. For instance, yellows are better at certain tasks than reds, but worse at others.

A.C. and Marlene’s service sees them defending various realities against the forces of Expulzar, a being of unfathomable power who desires the destruction of all universes. Why? You’ll have to read and find out, but rest assured, it has nothing to do with satiating some hunger, or doing it just to do it.

Zatswan: Multiversal Guardian features a character of African descent in a leading role, and readers won’t have to hope or wonder if he will be a character worth supporting, nor will they need to make compromises with him the way they would for, say, Cyborg and John Stewart from DC Comics. My full support is behind A.C. Cooper and I have a ton of confidence in him. I understand many black comic fans’ patience is exhausted and I’d like to clarify right now they will not have to deal with things such as the black character being mutilated, asexual, having a ridiculous hero design, being a support player to white characters, or being a stereotype.

I also understand that publishing stories is a marathon and not a sprint, meaning it takes time for a new story to build an audience. Zatswan is a precious project of my own, and I will be making stories about it for as long as I can. Readers will not have to worry about Zatswan being abruptly cancelled the way they would for, say, Cyborg. Because Zatswan is so important to me, I always strive for very high quality writing and artwork. Substandard content, story directions suddenly changing because of behind the scenes editors, or rushed poor fill-in artwork will not be issues here.

Alex Woolfson, author of the comic series The Young Protectors, which is about a team of gay superheroes, is a big inspiration of mine. The success of his series showed me there are under served audiences out there hungry for content in comics. The large publishers like DC do not seem able to reach these people and effectively satisfy them, yet someone like Alex Woolfson, without any corporate might behind him, is.

I believe the problem is with the entire comic industry, from the executives, to the editors, to some of the creators, to the distributor, to the comic shop owners, and to some of the fans. For people who aren’t the demographics mainstream comics cater to, perhaps the best way of addressing the issue is to bypass all of those obstacles altogether by having fans directly support creators who produce content they enjoy without any bureaucracy between them.

If you enjoy Zatswan, you can support it by clicking the Patreon button below and pledging a monthly amount of money you’re comfortable with. Even a dollar is a big help! This will make it easier for me to keep getting you content you like.

Look forward to a new website dedicated to Zatswan in the near future, which will update multiple times a week with new pages!