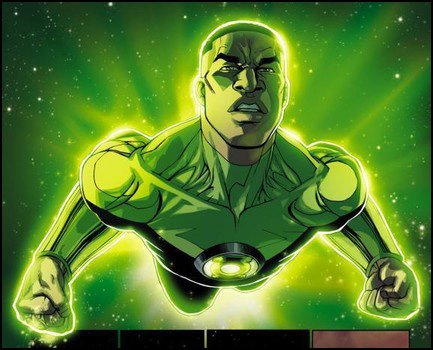 With the announcement of a new Green Lantern movie scheduled for 2020, many people are getting into figurative camps, supporting which Green Lantern they think should be the focus of the film, and a member of the Justice League. It always comes down to two characters above all others; John Stewart and Hal Jordan. Naturally, I am 1000% behind John Stewart. In browsing the net, I have seen some arguments in favor of Hal Jordan, and I’d like to address a couple of the more consistent ones, and bring out why I feel they don’t hold much water.

First up is that Hal Jordan has more stories to adapt than John Stewart.

I will concede that is true! Hal Jordan does have more comic book stories centered on him than John. However, this argument seems to carry the implication that comic book movies are direct adaptations of the source material. It is actually very rare that they are. This argument also implies that people cannot simply write new stories that accommodate the John Stewart character. As if writing stories for this particular character is virtually impossible. If that was truly the case, we wouldn’t have episodes of Justice League that are focused on him, like “Blackest Night,” “Hearts and Minds,” and “Starcrossed.” None of those events ever happened in comics, and yet they’re famous stories. The show had writers that wrote for the character. It was really simple. I don’t see why the films must be different.

I think we should consider why Hal Jordan has been focused on much more than John Stewart. There are layers of reasons, such as Hal Jordan being created first, writers and editors preferring Hal Jordan, and so on. However, underneath all of those, the core reason is because the products that DC Comics has been putting out for decades upon decades have been made primarily by, and primarily for, White males, which Hal Jordan is depicted as being. For this great length of time, appealing to other demographics has not been anything they strived to do with any great effort.

Given that the comics that birthed Hal Jordan were the product of a society that was very much rooted in racism, it was virtually impossible for John Stewart –a Black character- to be a huge showcase in that climate. When the Green Lantern series was rebooted in 1960, in the United States, people who looked like the John Stewart character had to drink out of specialized water fountains away from the normal ones, had to sit in the back of buses, and were refused service at certain eating establishments, all because of the way they looked. What are the chances that there would be an idealized superhero that looked like John Stewart and was the star of a popular comic book series back then?

The question, then, is should this system where only Whites are idealized heroes be preserved? Should Black characters be denigrated because they never had the opportunities of the considerably more privileged White ones? This system, which is deeply rooted in the industry and the fanbase, is built on the notion of White male power fantasy.

Now it’s 2014, and we live in a different time, when people are fortunately much less ignorant, on the whole. In actuality, people of today have even accepted and been acclimated to a Black Green Lantern, more so than the White one. This is because progressive people (Bruce Timm, James Tucker, Dwayne McDuffie, et al.) gave the Black character an opportunity, instead of holding him back because of an outmoded “tradition,” which is ultimately rooted in racist ideals.

If Black characters are continually held back for White ones, because, “That’s the way it was sixty years ago,” we may as well come out and call superheroes a White male pastime and be done with it.

Another argument I see is that too much time and money was spent on making Hal Jordan viable. Therefore, WB should stick with him.

This one is, frankly, very foolish to me. First of all, a lot of time and money was spent building up John Stewart in Justice League, Justice League Unlimited, and related merchandise, yet DC and WB didn’t have a problem completely shafting him when the 2011 Green Lantern movie was made, or in their numerous direct to DVD animated films, or in Green Lantern: The Animated Series, and so on. So, why should Hal Jordan get preferential treatment now?

What is even more unfair about this reasoning is that a lot of time and money was lost in backing the Hal Jordan character! The big budget film lost money, the merchandise didn’t sell, and the cartoon didn’t last long. Why should WB risk throwing even more money down that funnel? Why should Hal Jordan continue to get all these chances when John Stewart has never failed them, and when legions of fans are dying to see him on the big screen?

This is why I will boycott the DC films if Hal Jordan is chosen over John Stewart. I simply will not accept that racist exercise. John Stewart has only ever succeeded for WB, and for him to continue to be disenfranchised… well… it smacks of racism! It smacks of trying to hold onto that outdated principle where Black characters do not get opportunities, because that’s the way it was a long time ago.

There is no logical reason not to use John Stewart. There are reasons rooted in passion and personal preference, but no good reason born of rationality, fairness, and just good business sense. John Stewart is this generation’s Green Lantern. He’s never failed. The Hal Jordan projects bombed hard, and many people wondered why Hal Jordan wasn’t John Stewart. That, in itself, is extremely telling.

The fans are dying to see Green Lantern John Stewart and he’s primed for success!