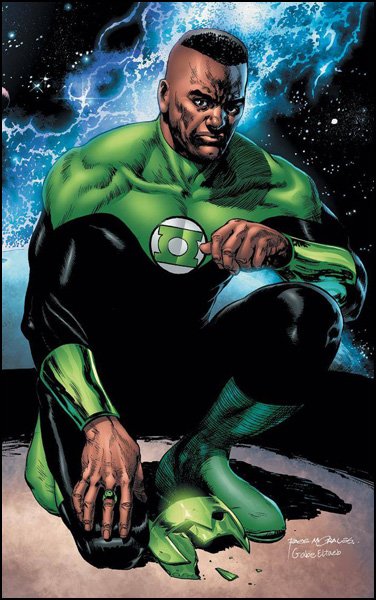 It’s been a while since there were any Green Lantern Corps movie rumors or news worth reporting on, but Latino Review has gotten the mill rolling again. They wanted to see what was up with Green Lantern in the cinematic world and dug up some interesting information from their sources.

“The Green Lantern Corps movie in 2020 won’t just feature Hal Jordan and John Stewart–the two most popular Green Lanterns–but also Kyle Rayner was name-dropped as a third Green Lantern from Earth to appear in the film. Another big takeaway is the age of these Lanterns, namely Hal Jordan. who the studio wants to be in the age range of, say, Matt Damon. The other two will be younger.”

As for an older Hal Jordan, if the character is going to appear in the films then that is how I’d prefer to see him. That, along with the supposed inclusion of Kyle Rayner, makes me wonder if the studio is going the “Emerald Twilight” route and will showcase Hal Jordan as Parallax. Though Jordan’s fans would no doubt blow a gasket if that happened, I think that would be the best course of action after the abysmal Ryan Reynold’s take on Hal Jordan in the 2011 Green Lantern film. While I wouldn’t want to see the demise of the Green Lantern Corps, which is what happened in the “Emerald Twilight” comics, because I think that’s needlessly throwing away one of the best concepts DC has, I think Parallax—as Hal Jordan, as Parallax was originally conceived—is arguably the best Green Lantern villain there is.

About Rayner, I’m worried about things being too cluttered with more Earth Lanterns, which is a pitfall the comic books have fallen into, but I’m open to see how things play out if the studio is going to include him. I like the idea of a younger John Stewart. I would certainly hate to see the character as an older mentor type.

These rumors are interesting. GreenLantern.Co will keep you up to date with all Green Lantern Corps movie happenings.