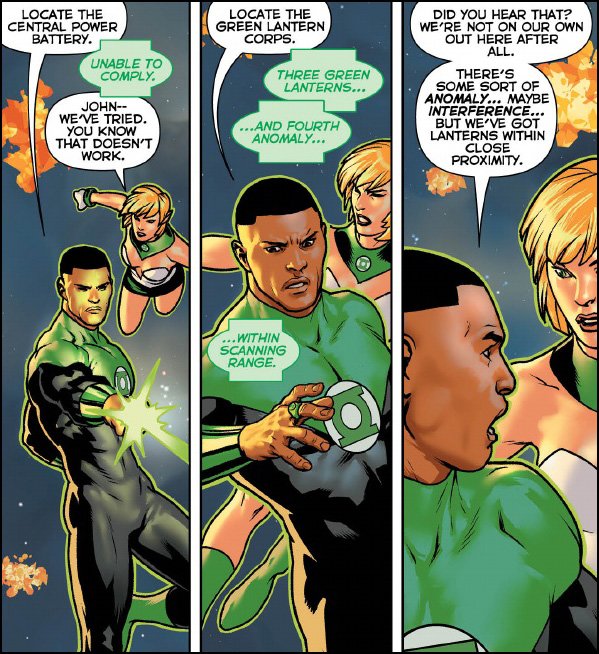 The moment we’ve all been waiting for draws closer and that is the debut issue of Green Lantern: Lost Army. USA Today has the preview of the issue along with information about the series from writer Cullen Bunn. Some excerpts:

“The crux of the first story arc is tracking down where the rest of the Lantern Corps is but also trying to power their rings again in a very hostile corner of the galaxy while also finding a way home. (“Cagey” readers will have figured out where they are by the end of the first issue, Bunn says, and the second issue “will have put a very fine point on it.”)

I was curious on how Bunn was going to handle the reveal of wherever it is the Lanterns are. I was wondering if he would divulge that early on, or if it would be a revelation somewhere down the line. Apparently they’re in a universe that some readers will recognize. That’s interesting.

One thing that has concerned many John Stewart fans is whether or not John will be the main character in this series. The article offers some… vague insight on that.

“While Bunn plans on exploring each of the main cast with a little more depth as the series goes forward, Stewart is the main focus of the initial issues of Lost Army, with flashbacks to his days on the frontlines of war as a soldier.”

John is the focus of the initial stories? I’m certainly open to exploring the other characters, but I am hoping Lost Army is still primarily John Stewart’s story. He is, after all, the leader of the bunch.

I have really enjoyed everything I’ve seen so far from Lost Army including this preview, so despite some concerns, I am still very exciting about this series. Take a look at the USA Today article and preview in the link below, and be sure to pick up issue #1 this Wednesday.
Green Lanterns are ‘Lost’ in space drama

Support for John Stewart as the cinematic Green Lantern keeps pouring in. Huffington Post has released an article that sponsors the idea of seeing Idris Elba play the Emerald Crusader.
Idris for Green Lantern