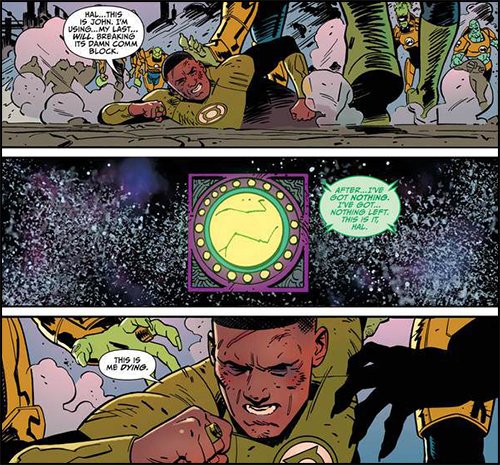 The preview for Green Lantern: Darkseid War #1 is up at Uproxx.com. In this preview we see John Stewart and the Green Lantern Corps in a pulverized state as John spends his supposed final moments reaching out to an absent Hal Jordan, telling of his great defeats. If that doesn’t sound terribly appealing, you’re not alone. Aside from Doc Shaner’s art skills, I really don’t enjoy this preview, and it’s an example of why I expressed trepidation when the solicitation to Justice League #48 was released, and when I first heard John would participate in a Geoff Johns event alongside Hal Jordan. I always knew that there was great potential for this event to be terribly damaging to John Stewart, and what’s seen here isn’t particularly promising. That said, this is only a five page preview, so a lot can still happen. This issue will be out this coming Wednesday, November 11.