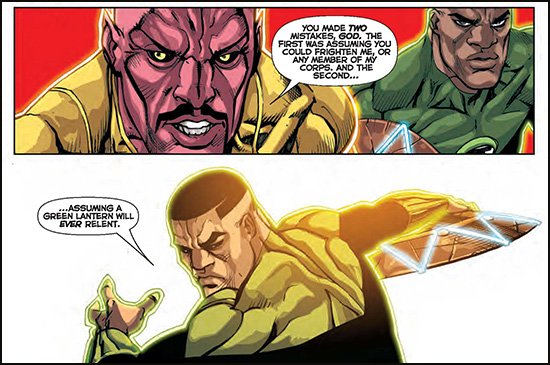 There’s been more publicity for the “Godhead” event, which also features signs of things to come. Van Jensen, writer of Green Lantern Corps, and Robert Venditti, writer of Green Lantern, answered some questions with Newsarama.Com, and also showed off an image from the upcoming Green Lantern Corps #37, seen above. As we can see in the image, John Stewart is back in his regular Green Lantern uniform, so I suppose his tenure as a Star Sapphire doesn’t last long at all. That’s actually a relief to me. A small part of me was afraid that DC would try to sabotage John by making him a Star Sapphire for an extended length of time. I knew that was highly unlikely, but I don’t put much past DC Editorial. On that note, here are some excerpts from the article:

The two writers, who also currently co-write The Flash, have invented new threats and thought-provoking personal challenges for the Lanterns while shaking up the team. And although some wild rumors about John Stewart dying have been proven false, the latest issue of Corps put him in a Star Sapphire ring.

What’s false is the truth of this statement. Previous Green Lantern Corps writer, Joshua Hale Fialkov, actually confirmed that DC Editorial’s John Stewart death mandate was true. What happened was the editors ultimately decided to not follow through with it once Fialkov left over the ridiculous decision and word got out as to why.

Anyway, moving on to the interview.

Jensen: There’s some very central stuff that goes on in Green Lantern Corps #37. I can’t really talk too much about it without spoiling the end of Act II.

In a big way, the final act [in December’s issues] is about the various Lanterns really taking the fight to the New Gods. We’ve been building the Lanterns up and seeing them trying to equip themselves mentally and physically with the kind of weapons that they need to take on an entire army of gods.

So that’s really central to the next issue of Green Lantern Corps.

And there’s some very, very big fights ahead.

I’m looking forward to seeing how the Green Lanterns deal with the seemingly unstoppable New Gods. When asked about what threat John and the Corps will face after “Godhead,” Jensen says:

Yeah, what’s coming up is not something that has to do with the Black Lanterns. It’s a different threat. And it’s something that’s going to emerge out of existing Green Lantern history, so this is not some totally new thing, but an exploration of something very, very old and very strange in the Lanterns’ history, but adding some new wrinkles to it.

The central idea we’re exploring is, with the Lanterns caught up in huge battle after huge battle, again and again and again, their mission of policing the universe — they really have not been able to do that.

So the universe, in the absence of Green Lanterns, has fallen into darkness. Like, if you’d imagine a city where the police have been caught up in some ongoing, massive situation in one part of town and the rest of the city, with no police whatsoever, would turn to chaos. And that’s what we’re seeing through a lot of the universe.

Venditti: Yeah, the Templar Guardians have been off with Kyle for, well, going on 20 issues now, familiarizing themselves with the universe after having been locked away for so long. And now they’re coming back home to become leaders. But they’re very different characters from the old Guardians. The old Guardians, I think, over time became dark and twisted and so focused on the end.

But that doesn’t mean there aren’t still huge scale threats, believe it or not, even larger than the ones we’ve seen so far, including the New Gods, and they’re still on the horizon. Given everything that the Corps has been through in the past couple years.

As Van said, the Corps have left much of the universe unpoliced. And the universe at large has fallen out of favor, in terms of how they see the Corps.

There are a lot of challenges that need to be faced, and they’ll lead to some pretty drastic schisms that are going to happen. Some of these things will come to conclusion by issue #40. Some of them, we’ll see exactly how things are different after we come back from the two-month break.

Bigger threats than the New Gods? That sounds like the Anti-Monitor. You can read the rest of the interview at the link below:
GREEN LANTERN Writers Talk GODHEAD, Say ‘Things Will Be Different’ Post-CONVERGENCE