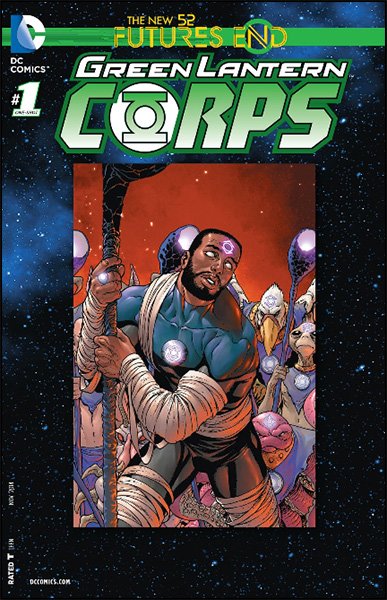 It’s September, which means gimmick month at DC. This time, they’re taking us five years into an unsettling future. See what GreenLantern.Co thinks of John Stewart’s foray into “Futures End.”

“Green Lantern Corps: Futures End #1 features many things I prefer not to see in a John Stewart story all rolled up into one comic book. It’s heavy on the Emotional Spectrum, John Stewart is moping about the destruction of planet Xanshi, he’s revealed to be a massive failure, and as the cover alludes to, he becomes an Indigo Lantern. Naturally, it is a very depressing read for me. The interesting thing, however, is I believe that is actually the aim of this comic book.”

Stay tuned for more content, and thanks for visiting!

In case you missed it, Van Jensen appears on the DC Comics Youtube program DC: All Access. He tells us a bit about the “Futures End” issue of Green Lantern Corps and where John Stewart goes from here. There’s also some information on the upcoming “Godhead” event. Check it out.